Sleep apnea is a common but potentially serious condition in which breathing stops and starts up again for periods of 10-20 seconds while you sleep (this can go on 100’s times each night). Even though sleep apnea is very treatable, it very often goes undiagnosed by medical doctors. Sleep Apnea affects approximately 18 million people in the United States alone and not even 10% ever get diagnosed properly. It is believed if sleep apnea is left untreated, it can take about 8-10 years off a person’s life span. A simple sleep apnea dental appliance can add years back to you life. Obstructive sleep apnea (OSA) is the most common type of sleep apnea. This type of sleep apnea occurs when the soft tissue in the back of your throat relaxes during sleep, causing a blockage of the airway. This in turn blocks the airflow into the lungs causing a cessation of breathing momentarily. 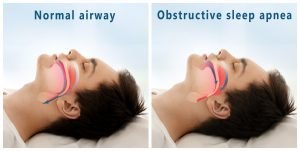 Obstructive sleep apnea is defined as five or more episodes of apnea (temporary absence of breathing) or hypopnea (diminished depth and rate of breathing) per hour of sleep (called apnea-hypopnea index or AHI) in individuals who have excessive daytime sleepiness. Patients with 15 or more episodes of apnea or hypopnea per hour of sleep are considered to have moderate sleep apnea. If left undiagnosed and untreated sleep apnea prevents you ever gaining  a restful sleep necessary for your health. The recurring pauses in breathing shocks your body out of its natural sleep rhythms over and over again. This results in you tending to spend more time in light sleep and less time in the deep, restorative sleep you need to be full of energy, mentally sharp, and productive the following day. Sleep apnea can be difficult to diagnose without medical help. This is because most sleep apnea symptoms occur during sleep. Help is needed so ask a bed partner or record yourself during sleep. A common misconception is that everyone who snores has sleep apnea. This is not a hard and true fact.

Some recent clinical studies have also found that if you have snoring and grind your teeth than you likely have some form of apnea, so you should get checked by a medical doctor. So how do you tell the difference between common snoring and a more serious case of sleep apnea? The biggest marker is how you feel during the day. The quality of your sleep is unaffected by “normal” snoring as much as sleep apnea does. So you would be less likely to suffer from sleepiness and fatigue during the day. Obviously, we will all have some restful nights. This would be more of a long term feeling day after day.

How Can Your Dentist Help With A Sleep Apnea Dental Appliance?